pro-cras-ti-na-tion |prəˌkrastəˈnāSHən, prō-|
noun
the action of delaying or postponing something: your first tip is to avoid procrastination.

Who would have thought that after decades of struggle with procrastination, the dictionary, of all places, would hold the solution.

Avoid procrastination. So elegant in its simplicity.

While we’re here, let’s make sure obese people avoid overeating, depressed people avoid apathy, and someone please tell beached whales that they should avoid being out of the ocean.

The thing that neither the dictionary nor fake procrastinators understand is that for a real procrastinator, procrastination isn’t optional—it’s something they don’t know how to not do.

In college, the sudden unbridled personal freedom was a disaster for me—I did nothing, ever, for any reason. The one exception was that I had to hand in papers from time to time. I would do those the night before, until I realized I could just do them through the night, and I did that until I realized I could actually start them in the early morning on the day they were due. This behavior reached caricature levels when I was unable to start writing my 90-page senior thesis until 72 hours before it was due, an experience that ended with me in the campus doctor’s office learning that lack of blood sugar was the reason my hands had gone numb and curled up against my will. (I did get the thesis in—no, it was not good.)

Even this post took much longer than it should have, because I spent a bunch of hours doing things like seeing this picture sitting on my desktop from a previous post, opening it, looking at it for a long time thinking about how easily he could beat me in a fight, then wondering if he could beat a tiger in a fight, then wondering who would win between a lion and a tiger, and then googling that and reading about it for a while (the tiger would win). I have problems. 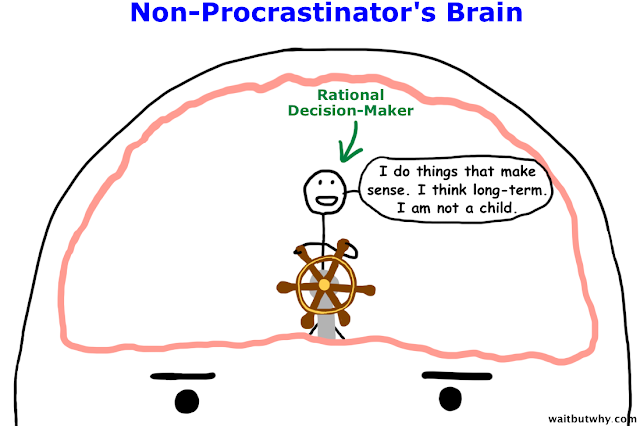 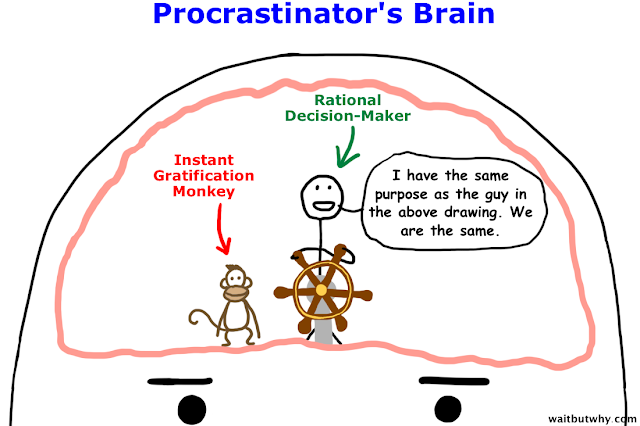 It seems the Rational Decision-Maker in the procrastinator’s brain is coexisting with a pet—the Instant Gratification Monkey.

This would be fine—cute, even—if the Rational Decision-Maker knew the first thing about how to own a monkey. But unfortunately, it wasn’t a part of his training and he’s left completely helpless as the monkey makes it impossible for him to do his job.